In my very first article, I described you an optimized XI from the 18/19 season and compared it to points per million metric. I used a genetic algorithm to find a team that scored the most points in the last season within the budget constraint. That solution did not take into account the fact, that some players did not play every one of 38 games because of injuries, bans etc.

In order to consider different game time for all players (mainly those who were injured during last season), I calculated the optimal team again, but this time I used in the cost function points per match from last season. Also, I wanted to make it as close as possible to the upcoming season, so I used new prices and adjusted points for Zaha, Perez and all other players whose positions changed. I considered only players that played more than 900 minutes in the last edition of Premier League.

In the picture below, there is the optimal team with highest points per match and with new prices. 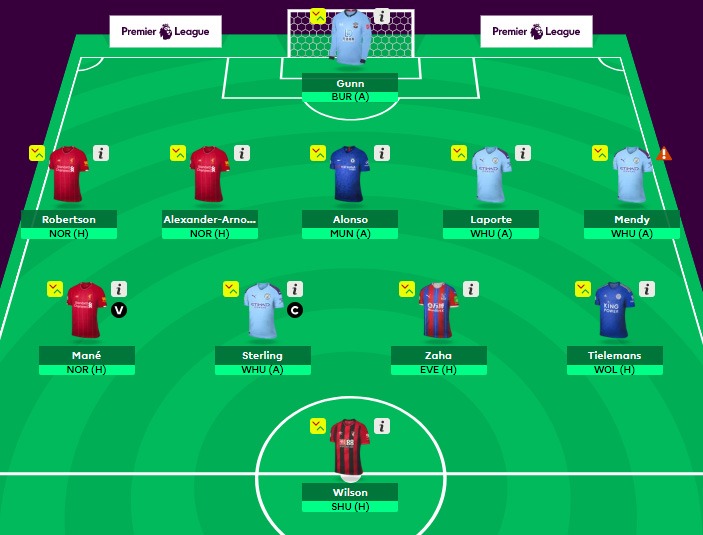 Again, starting XI value is 82,5m and bench: 4m-4,5m-4,5m-4,5m. Model considered just one player as a captain for whole season and no autosubs or transfers.

Points per match from the last season of this optimal team is 67,82 (including a captain). When we multiply it by 38, we get 2577 points. However, it is just hypothetical number because of injuries of Wilson or Mendy etc.

Five at the back. Expensive defenders worth the money. The algorithm shows how important the contribution of premium defenders to the global optima is. However, going five at the back may be a bit of an extreme solution, but it may pay off. Be aware of the risk from “putting all eggs into one basket” if you decide to go for this alternative. You will find methods of risk minimizing in FPL in one of my previous articles.

In last years, a midfield has been a goldmine of FPL points. Two premium midfielders Sterling (Captain) and Mane got to the optimal team and two budget options Tielemans and Zaha. Sterling and Mane are only two 10m+ players in the optimal team and they are both two great captaincy options. The algorithm shows that two premium 10m+ players may be enough if you spread the rest of your budget correctly.

Similar to the previous article, there is no expensive forward. One point more for a goal and clean sheet point make expensive midfielders better options than expensive forwards. However, downside of this solution is that you need to have two 4,5m nonplaying forwards on the bench.

Thank you for reading this article. I hope I helped you to better understand how to spread your money in your FPL team in order to achieve the highest possible outcome.